I saw this one live with my family at Theatricum Botanicum. I wrote about the venue in my previous review of All’s Well That Ends Well. 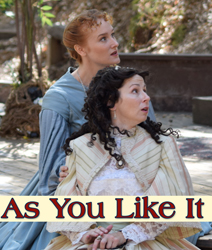 Rosalind and Celia
Picture from the promotional materials.


This play is one of Shakespeare’s trio of lighthearted comedies written between 1598 and 1599. (The others are Much Ado About Nothing and Twelfth Night.) After that, his plays took a darker turn.


Like the earlier A Midsummer Night’s Dream, this play is set primarily in a forest. A utopia, perhaps, far from the corruption of city life. Of course, not all is well with Oberon and Titania, and not all is well in this play either.


The old duke has been banished by the usurping new duke, so he takes refuge in the forest of Arden, “like Robin Hood,” as one character puts it. There he abides, enjoying his pastoral lifestyle.


In the meantime, the young gentleman Orlando, persecuted by his older brother Oliver, flees to the forest - as does the old duke’s daughter, Rosalind, who is banished by the new duke. Joining Rosalind is the new duke’s daughter Celia, who is fast friends with Rosalind. To avoid the trouble attendant on being two young ladies traveling unaccompanied, they disguise themselves. Rosalind becomes a young man, “Ganymede,” while Celia becomes “his” servant. The court jester, Touchstone, eventually comes along with them.


This is a pretty common Shakespeare ploy: a young woman disguising herself as a man. Of course, in his day, all parts were played by males, so you really had a young man playing a woman pretending to be a young man. Ah, the gender-bending 16th Century.


As might be expected, much hilarity ensues, and several memorable speeches.


The most well known is that of Jaques, the dour counterpart to Touchstone. “All the world’s a stage…”


As is often the case in Shakespeare’s plays, many of the best quotes go to the jesters, or in the case of Jaques, the anti-jester.


Touchstone is constantly clowning, but his seemingly silly speeches contain a grain of truth. As he puts it, “The more pity that fools may not speak wisely what wise men do foolishly.” Even in our own era, the role of the jester - the satirist, perhaps - is to point out the foolish behaviors of the “wise.” (Perhaps, one might say the “powerful,” as these are those to whom Touchstone refers.)


Of all of Touchstone’s speeches, perhaps the best is his spoof on the art of courtly insult and the practice of dueling. The degrees are taken from Brewer’’s Dictionary of Phrase and Fable, but with a humorous twist.


JAQUES:
And how oft did you say his beard was not well cut?


TOUCHSTONE:
I durst go no further than the Lie Circumstantial,
nor he durst not give me the Lie Direct; and so we
measured swords and parted.


JAQUES:
Can you nominate in order now the degrees of the lie?


TOUCHSTONE: O sir, we quarrel in print, by the book; as you have
books for good manners: I will name you the degrees.
The first, the Retort Courteous; the second, the
Quip Modest; the third, the Reply Churlish; the
fourth, the Reproof Valiant; the fifth, the
Countercheque Quarrelsome; the sixth, the Lie with
Circumstance; the seventh, the Lie Direct. All
these you may avoid but the Lie Direct; and you may
avoid that too, with an If. I knew when seven
justices could not take up a quarrel, but when the
parties were met themselves, one of them thought but
of an If, as, 'If you said so, then I said so;' and
they shook hands and swore brothers. Your If is the
only peacemaker; much virtue in If.


While his other speech is better known, I am fond of Jaques explanation of his melancholy. It does, after all, mention lawyers.


ROSALIND
They say you are a melancholy fellow.
JAQUES
I am so. I do love it better than laughing.
ROSALIND
Those that are in extremity of either are abominable fellows and betray themselves to every modern censure worse than drunkards.
JAQUES
Why, ’tis good to be sad and say nothing.


The setting of this play was interesting. It has long been the custom to set Shakespeare’s plays in other times and places. Particularly in the case of most of the comedies, the setting is some nebulous time and place - or else one in which it clearly isn’t intended to be set. (For example, there are jokes at the expense of the French in plays “set” in ancient Greece or Rome.) The setting itself isn’t the point.


Theatricum placed this one in the immediate aftermath of the American Civil War. The theme of “brother against brother” is present in the play as well as in the setting. And, the final reconciliation gave some hope of the eventual reconciliation of the nation.


The setting also gave the opportunity to utilize a whole host of Civil War era songs. The actors sang them outside before the play, and at appropriate places within it. I am also fairly certain that the tunes of other songs from the era were used to set Shakespeare’s own songs. (My limited knowledge is at fault here. Some tunes sounded familiar, but I couldn’t place them.)


As usual, Theatricum put on a high quality show, with a high standard of acting. Rosalind was played by Willow Geer (granddaughter of Will Geer, founder of Theatricum, and best known as Grandpa Walton), who brought a fascinating combination of femininity and masculinity to the role. As she did in All’s Well That Ends Well, she was able to make her character both strong and vulnerable, emotional and rational, and always fascinating to watch.


For those in Southern California, Theatricum’s season runs through the end of September, so there is a chance to go see this if you wish.


In lieu of a clip from the production itself, here is a famous setting of one of the songs from the play by William Walton. Novelist Thomas Hardy would use the line as the title of one of his more gentle novels.

Posted by Diary of an Autodidact at 12:48 PM