Doug Wilson and the "Gospel" of Gender Hierarchy

My lovely research assistant (and wife) brought this to my attention recently.


I have made no secret of my dislike of Doug Wilson. Why do I loathe him? Maybe it is that he wrote a plagiarized pamphlet - and then an entire book - defending Confederate slavery, while ignoring and denying the actual historical facts surrounding the “peculiar institution.” Maybe it is that he is an AIDS denialist. Maybe it is that he teaches that the most “godly” societies of the last 2000 years were the Confederate South and the Middle Ages. Maybe it is his view of marital sex as a display of male dominance and the enactment of a rape fantasy for both parties. Or, maybe, it is the fact that he sounds very much like a narcissistic bully.


Well, Wilson is at it again, with a (purported) teaser for his new book How To Exasperate Your Wife. I’m not sure from the post whether Wilson wrote the entire book, or just a chapter. Whatever the case is, he has written this little “Chiastic Catechism on Biblical Sexuality,” which can be viewed through this link. (It is a “do not link” so that it doesn’t give Wilson any hits to raise his spot in search engines.)


Wilson, of course, has made no secret that he is a follower of Rushdoony, the father of Reconstructionism, and that he advocates Patriarchy. This little bit on his views on sexuality and gender, however, are a bit eye opening. Unfortunately, I have been seeing far too much of these views creeping into Evangelicalism as a whole, substituting for the actual Gospel, a new “gospel,” the chief tenets of which are Gender Hierarchy and Gender Essentialism, which in practice amounts to Gender Hierarchy Lite.


So, let’s look through the Doug Wilson version of “biblical” sexuality. 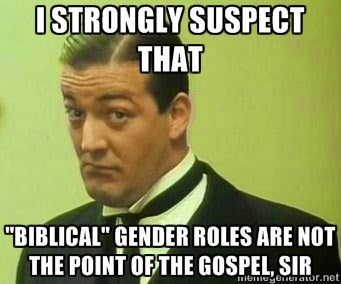 Note on Wilson and “marriage is the cure for sexual problems”:


The idea that all sexual problems can be cured by marriage is endemic to Evangelicalism, but it can lead to some poor - and dangerous results. A few years back, Wilson took this idea to a particularly troubling extreme when he had a parishioner who had a problem in that he was a child sex predator. He had been convicted twice, in fact. Rather than realize that this problem was not going away, and that this man needed to be kept away from children, Wilson advised him to take the universal cure: get married to a young woman. And presided over the wedding. I pray to God that they are unable to have children. Aka further victims for this guy. Doug, marriage is not a cure for pedophilia. Sorry, it isn’t, and by suggesting that it is you are putting children at risk for further victimization.

Note on Evangelicalism and Wilson:


I mentioned Wilson in connection with “farewelling”. I believe that is important, because Wilson remains an accepted member of the Tribe, despite all of these troubling teachings. What that says to me (particularly in light of those who have been dismissed from the fold) is that Evangelicalism isn’t the least bit troubled by the idea of Gender Hierarchy, doesn’t worry that it enable abusers, and doesn’t notice that its main proponents (Gothard, Phillips, Driscoll, Wilson, and others) tend to show the symptoms of narcissistic personality disorder. My father-in-law and I have had an ongoing discussion about this, and he believes that Christians are extremely vulnerable to narcissists, because they are not taught how to recognize them, and because the traits of narcissism match the “virtues” we have been taught to revere.


If I were to give my own recommendation, it would be that the first sign of one of these guys is that they talk about hierarchies. Men over women, adults over children, with an emphasis on unquestioning obedience. This is precisely what narcissists expect from their followers, as it feeds their need for attention and self-importance.


Wilson is a particularly obvious example, but I find it troubling that Evangelicalism is unable to recognize the poison of the “gospel” of Gender Hierarchy and Gender Essentialism. We ought to be disgusted by the teachings of the Doug Wilsons of the world, and recognize that the “gospel” he is teaching is the opposite to the gospel taught by Christ.

For me of the better discussions of Wilson's problems with gender, race, and sexuality, see this post. The author understands the linkage between his denialism when it comes to slavery and his dangerous teachings on marital sex.

After I wrote this, but before I edited it, John Piper really stepped in it regarding men, women, and rape. I’m going to dissect that one in the future. Stay tuned.

Posted by Diary of an Autodidact at 12:21 PM