Reading With My Kids: The Scarlet Pimpernel by Baroness Orczy


Believe it or not, I had never read this book - or anything by Orczy - before. I had heard of The Scarlet Pimpernel, of course, and had a vague idea of what it was about, but never actually got to reading it.


I suspect my wife suggested it to the kids for our trip, since it wasn’t specifically a kid-oriented book, and we haven’t talked about the French Revolution in history yet.


First a bit about the author. Emma Orczy, born in 1865, came from an aristocratic Hungarian family, who fled their estate in fear of a peasant revolt when she was a child. After bouncing around Europe, they settled in England. She studied music, then painting, at which time she met her husband Montague Barstow, a painter and the son of an English clergyman. She would later, near the end of her life, describe the marriage as, “for close on half a century one of perfect happiness and understanding of perfect friendship and communion of thought.” I am inclined to put them down as a notable example of a rather egalitarian marriage, particularly in light of the way they worked together professionally. 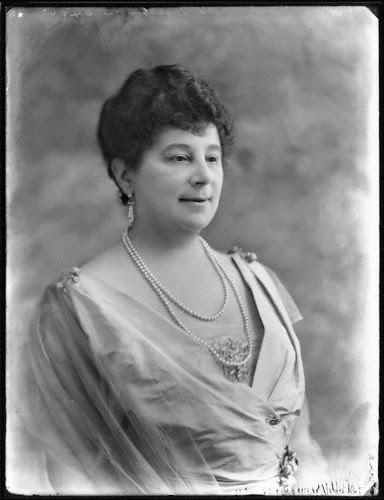 The couple started out impoverished, but Emma started to assist her husband with his translations and illustrations. She also submitted a few short works to magazines and started writing novels.


Success came, however, with a play. Emma and Montague collaborated on a play about the Reign of Terror, entitled The Scarlet Pimpernel. It was a success, but was soon overshadowed by Emma’s novelization of the play. Numerous sequels followed, as well as some unrelated novels. Eventually, her writing enabled them to buy an estate in Monte Carlo, and thus return to the upper class lifestyle of her youth.


In discussing this book, I find I have to separate out the author’s opinions from the work itself. Orczy was unabashedly an aristocrat, fully believing in the superiority of the aristocracy and supporting British imperialism. This was, no doubt, a bit natural for someone with her background, but it still feels a bit grating - at least to this American. In fact, I made the false assumption that it was written in the true Victorian Era, rather than in 1904. With that late date, it feels a bit behind the times in its attitudes. Likewise, I find her treatment of women in the book to be quite retrograde. The story is mostly from the point of view of the female protagonist, and yet she is not given much to do. If anything, she is responsible for screwing everything up, and has to be rescued in the end. For someone like Orczy, who herself was fairly independent and accomplished much on her own, this is just odd. It’s not like stronger female characters weren’t saleable in 1904 either. I find it puzzling.


These gripes out of the way, let me praise the book itself. Whatever one’s opinions of the French Revolution or of class and caste in general, it is pretty hard to find anything good in the Reign of Terror, which mostly left dead bodies - including those of far too many children - in its wake. Also unforgivable was the senseless execution of Antoine Lavoisier, the groundbreaking chemist and a voice of moderation at the time.


Orczy does an admirable job of portraying the Terror, and the effect it had on whole families marked for the guillotine. The disruption to the nation, and the sense of fear it instilled was an early instance of the informing police state later to become endemic to the Nazi and Soviet regimes in time. It’s a bit beyond the scope of this review to get into the causes of the French Revolution and how it went so wrong, but I think G. M. Trevelyan had a point in England Under the Stuarts that a successful revolution requires “a State where wealth is well distributed, classes fairly balanced and kindly related, the common intellectual food wholesome, the imagination alive and the moral standard high.”


I’m afraid I have become distracted again from the book.


The Scarlet Pimpernel is above all, a rip-roaring yarn of intrigue, unparalleled gall, a memorable and delightful hero.


The Pimpernel himself is the forerunner of a whole host of comic-book superhero tropes. He disguises himself as a dimwitted, foppish British nobleman, all the while concealing his true powers. He is a master of costume, able to use anything as a weapon or prop at the right time, and has simply unmitigated chutzpah. His ability to look right into the eyes of his enemy and somehow come up on top through guile rather than violence is delightful. One might best compare him to Batman in that he lacks mutant powers, but has the brains and finances to function as if he did.


The book is also a pretty good early cloak and dagger story, with spy versus spy every bit as much as in a John Le Carre novel. (See my review of Our Kind of Traitor.) I haven’t read any James Bond, but I suspect there might be a similarity there too. The villain is likewise well-conceived and memorable.


So, as a story, I really enjoyed it. The kids took a while to get into it, because it does start slowly. I’m pretty used to that, but my 8 year old son isn’t quite there yet. (The Hardy Boys only need one chapter to set the scene…) However, but the last couple of CDs, everyone was eager to hear what happened next.


The ending is satisfying - and also interesting.


I wasn’t at all surprised that the Pimpernel turned out to be disguised as the old Jew. It was a brilliant move, and possibly the only serious option. In fact, the brilliance of it is the way that it played off of French anti-Semitism. A quick scan of the news shows an uptick in said sentiment in recent weeks. France (and Germany, for that matter) is in no way over its history of Jew hating and baiting. It’s ugly and a bit concerning to see. England isn’t exempt by any means, but it never got to the point that the continent did. At the time Orczy grew up, England even had a Jewish prime minister, which would probably still be unthinkable in France even now.


In that scene, then, there is again the balance of discomfort with great adventure. The scene is played well, and makes sense, but in light of later events, the nasty stereotype - even in the context of one played for laughs at the expense of the French - is still painful. On the other hand, it does make for a good conversation starter, similar to Tom Sawyer.


Anyway, a fun adventure, some cringeworthy moments, but well worth reading.


It is probably fitting that earlier this week, I had a guy going by a handle promoting Nazism attempting to comment on my post on Nietzsche, Nazis, and Narrative. As expected, he intended to raise the usual bile about Jews supposedly ruling the world and their religion destroying everything that is good, etc., etc. Since my blog is not a public forum, I’m not really interested in giving guys like that a voice, so those comments will not be appearing.


However, if you want to read more on the topic on this blog, I recommend the above link along with my review of They Thought They Were Free, and also my review of George Eliot’s Daniel Deronda.


Although she made her name through literature, she actually got a few paintings exhibited. Here is the best known one, A Rural Courtship. 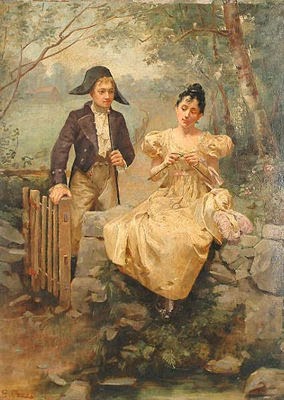 
Some of these are so well known as to be part of our common culture. One wonders if Orczy was the first to popularize “I say!” as the dim nobleman’s trademarked phrase. Certainly P. G. Wodehouse popularized it afterward.


Also, this book has one of the best and most effective uses of “damn” ever. Of course, it must be in a British accent to work.


All this short has in common with the book is the silly name and a reference to snuff. There are plenty of other literary and movie references, though, for the discerning viewer.

Posted by Diary of an Autodidact at 10:24 PM