I do not believe in love at first sight. Never have.

I met Amanda when I was in Law School. A mutual friend gave her dad my number when he mentioned he was looking for a law student to do some freelance work on a few cases, so my brother and I (also in law school) drove down for a meeting with him.

Amanda was filling in for her dad’s usual secretary that day. I took a seat in the lobby to wait for him, when this beautiful young lady in a red gingham dress came in and informed me that he would be with me shortly.

I never do stuff like that. I always assumed that marriage would happen as a result of careful planning. Better to make a logical and informed decision. Rash decisions make for poor matches, right?

I found out later that she knew as well.

I didn’t ask her out for over a year, however. She was young, not quite eighteen at that first meeting, and I still had a ways to go in school. So, for the time, we were just friends.

Her dad and I have a lot in common, particularly our mutual love of the outdoors, so I found excuses to visit them in their mountain home. Sure, I wanted to go hiking, but I wanted to see her, to be around her.

We eventually ended up “not dating.” Meaning, we were, I guess, sort of dating without exactly admitting it to ourselves. (See below.) Playing tennis, hanging out with my sister as the third wheel. (She was a good sport about it.) Obviously, we were interested in each other, but we weren’t really dating.

Near the end of my last year of school, I had to take the plunge. There was a Shakespeare production at a local theater, and my sister had other obligations, so a group outing wouldn’t work. And, honestly, I wanted to be with Amanda.

So I asked her out. I think it took her a little while to realize what I had done, because she first reminded me that my sister wouldn’t be there. I informed her that I was aware of that fact. Now, this complicated things. She told me she would go, but I had to ask her dad first. I expected that, and have never had any fear of “the parents.” Girls might be inclined to reject me, but never parents. Permission was easy to obtain, and I did.

One way or another, I found out (before the date) that Amanda had trouble sleeping that night, and worried that she had overcommitted. (Again, see below.) How could I ease her mind? Well, there is the Way of the Lawyer™.

I drew up a “contract” wherein we clarified our dating relationship. (Yes, this was very tongue-in-cheek.) I made it clear that going on a date with me did not bind her to marriage, going steady, or even a second date. She could come with me, get to know me, and decide if she wanted to see more of me. No obligations. No hard feelings.

She wanted a second date. And many after that. We knew.

One day, she had been at the mall with my sister. She said to me, out of the blue, “I found my ring. When are you going to propose?” So I guess you could say she is the one who proposed to me. But we both knew we were getting married by that time anyway.

I didn’t formally propose for a few more months. Hey, I was studying for the bar exam, and supporting myself on part time work.

It takes three months after the exam to get the results back. During that time, we remember all the mistakes we made, and none of the good stuff. Not fun at all.

On Memorial Day weekend of 2000, I found I had passed. That night, I presented Amanda with a ring. It would be another year until we married, but from then on, we were official.

Looking back on the first date fourteen years ago today, I feel like I’ve always known Amanda. We can’t imagine a better match. Sure, we used our brains and looked for red flags and all that, but we knew. The first time we saw each other. 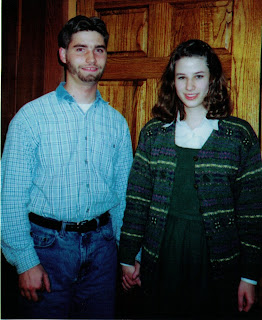 During our dating years. Wow, we look young...

Note about “Not Dating”:

I was going to just write up the story itself, but realized as I went on that it would be impossible to understand without a little background knowledge. Over the last few years, I have been surprised to discover that a number of my friends with similar backgrounds also did the “not dating” thing. Those who grew up in a normal modern American household would probably have no idea why one would do this.

Regular readers will remember that I spent my teen years under the influence of Christian Patriarchist Bill Gothard, and that Amanda spent hers in Jonathan Lindvall’s home church.

Gothard is a big proponent of “courtship.” (The best known book on this is I Kissed Dating Goodbye by Josh Harris.) Lindvall takes it further to what he calls “betrothal.”

For those unfamiliar, “courtship” is a rejection of dating. The man decides to pursue a girl, asks her father’s permission to “court,” and the couple is, for practical purposes, engaged. They are actively pursuing marriage, and it is very bad if they break up, because they have given pieces of their hearts to each other. (This is why they reject dating - they consider breaking up to be practice for divorce.)

On paper, there are some things to like about the idea. I liked not having the pressure to be in a relationship during high school. I wanted to eventually find a wife, so the general idea of only dating courting someone that I considered a potential spouse made sense.

The other ideas that came with it, however, are problematic. There is strong pressure to never break off a courtship. The agreement to court is considered the same as an engagement, except more so. This is particularly true once the change is made from basic “courtship” to the betrothal model. (In my opinion, many of those who use the term “courtship” tend to really mean “arranged marriage” if you dig deep enough. Douglas Phillips comes to mind.)

In my case, I was allowed - encouraged in fact - to have friendships with the opposite sex. Group activities were common, and I feel I got to know a number of interesting young women. I remain friends with several to this day.

In Lindvall’s system - and in that of most of the Christian Patriarchy systems - boys and girls are expected to be segregated. No friendships. No emotional entanglement. (I hope to do a future post on this one.)

The vision is this: the young person is guided by his parents (who have absolute authority over even adult children) to the right person. Once the decision is made that they will become betrothed, then they are allowed to develop a relationship.

How are we going to know it's the right person? God will speak, and God has revealed in His word that He speaks through authorities in all of our lives....the decision of whom to marry is based entirely on God's will confirmed by our authorities, with a confidence that God would bring romance to us as a blessing of our obedience...God wants young people to honor their parents...by voluntarily submitting their choice of a marriage partner to them.

In the Biblical model of ‘betrothal’, the decision to marry is made based on God’s will, confirmed by parents and other authorities, rather than emotional and hormonal impulses. The betrothal period is provided for the emotions to catch up to the irrevocable decision made prayerfully and rationally. Our emotions are not to lead us, but to follow us.

Note that this is an “irrevocable” decision. Once betrothed, the couple has agreed to marry. Irrevocable consent before love. Also note that God isn’t expected to tell the couple. Just the “authorities.” (Parents and pastor, in this case.)

In light of that, it was natural that Amanda would worry that by agreeing to go out with me, she was agreeing to marry me. Now, she knew her parents wouldn’t view it that way. But she knew I came from a similar background, and we hadn’t specifically discussed this. For all she knew, I (and my parents) would consider us betrothed. She wasn’t quite sure she was ready for that kind of commitment, and I don’t blame her.

(For the record, my parents and her parents didn’t push courtship particularly hard, rejected the betrothal model, and let Amanda and me date without interference.)

It was this reason that led me to make it clear to Amanda that we were not “courting,” but dating. No strings. No commitment. No promises. Just a chance to fall in love.

It’s funny in retrospect, but that “contract” was originally between me and her father. Yeah, we weren’t completely sure how to handle things with all that baggage. I knew that my father-in-law would find it amusing (he did) and hoped that Amanda’s mind would be put at ease. (It was.)

If you want to read Lindvall’s account of the “ideal” betrothal and marriage, you can find the story of Matthew and Maranatha here.  They may be perfectly nice people, but I still find the story creepy. That whole Victorian thing of the experienced older man marrying the innocent young lady.

I would be remiss if I left out this excellent article by Eric Pazdziora, one of my favorite bloggers - and a musician and composer as well.  It also has some great links.

A good summary of Gothard’s views on, well, everything, was written by a former acolyte here. I disagree with many of her other opinions, but she does do a good job of laying out Gothardism and its problems.

And, since I feel a certain sense of obligation to my fellow man, here are the clauses from the contract for your own use:

6.             and             agrees to hold each other harmless for any and all liability arising out of the date for actions not involving moral turpitude, including, but not limited to the following: bonehead remarks, bad puns, unintentional insensitivity, awkward pauses, fumbling conversation, general clumsiness, and weird family quirks.

Posted by Diary of an Autodidact at 5:29 AM