Source of book: I own this.
Date originally posted on Facebook: December 28, 2010

I am slowly re-posting my old Facebook reviews to my blog. This one was my major reading project of December, 2010.

This work probably needs no introduction. However, like so many great works, it is known of, but rarely known. If you were to refer to someone as a siren, most would understand the concept, but would have to confess that they had never read Homer.

I was introduced to Milton, like most, by a sonnet or two and a couple pages of Paradise Lost in high school. At the time, I was already beginning to appreciate the craftsmanship of the sonnet form; however, I lacked the stamina to really get beyond the surface of Milton’s often unfamiliar syntax. A few years later, I struggled through a bit of Canterbury Tales in the original Middle English. After this challenge, Milton seemed a bit easier, so I went back and read through those parts of my textbook. (Yes, I still have most of my high school textbooks.) At that time, I still wasn’t really ready to dive in, but noticed the beauty of Milton’s language.

After announcing my poetry reading project (starting with Frost), I was in my library with my wife, Amanda, trying to decide what to start next. She suggested Paradise Lost. I decided to take her up on the challenge.

In my opinion, every household should have three vital books which are necessary for understanding literature. The first is a good dictionary. The second is The Bible. The third is Bulfinch’s Mythology, particularly the first volume. I kept these close at hand for reference during the reading of Paradise Lost.

Milton set out consciously to emulate the Greek and Roman epics. The scope of the poem was to be sweeping, considering the history of mankind from before creation to the present age. The style was to pay homage to The Iliad, The Odyssey, and The Aeneid in form, style, and content. Milton also drew from both biblical and legendary sources for the story. A number of our popular conceptions of angels and demons can be found here, and probably date from earlier sources.

Amazingly, Milton wrote most of Paradise Lost while blind. Considering that there are over ten thousand lines, his memory must have been incredible. It is also clear that he knew the Bible and mythology intimately.

The poem is divided into twelve sections, each between 15 and 35 pages (in my edition). I found that it took a little over an hour for each section, as I had to look up some of the allusions to mythology. Thus, I figure I spent about 14 hours reading it. It was worth every minute.

The initial barrier is the language. Not only does Milton have an extensive vocabulary, including a number of archaic words; he reverses the order of words to suit the cadence of the meter and the epic style of writing. For example, he commonly places adjectives after their nouns, rather than before, as expected. I found I often had to read a sentence over again to figure out exactly where each verb was, then figure out who was doing what. At first, this is a bit like trying to speak like Yoda. However, with a bit of practice, it came more easily. By the end, I rarely thought about it at all.

Paralleling the epics of the past, Milton starts in the middle of the story, and tells the rest in the form of a recounting given by the angel Rafael to Adam immediately prior to the fall. Thus, after a brief preamble, the story begins in hell after Satan and the fallen angels are banished there after their rebellion.

It has been said that Satan is the hero of Paradise Lost. There is some truth in this: Satan is arguably the central character, and certainly the most active. He could also be considered a hero in the mold of the Greek “Tragic Hero”, a person undone by his tragic flaw. That flaw is usually, at its rood, pride. So it is here. Satan cannot stand the fact that God placed his Son in charge of everything – a job Satan wanted. In revenge, he seeks to spoil God’s new creation by causing the fall of mankind.

Thus, there is a parallel between the fall of Satan and the fall of Adam. Milton explicitly links the two with similar phrases and incidents. I also found that to a frightening degree, Satan says what we all think. His words are really the representation of our own dark thoughts – our desire to rule rather than submit, our taste for revenge and destruction, our manipulation, our belief that we know better. In that sense, I believe that Milton intended the fall of Satan to be the story of the fall of all of us. With Satan, we all have said, “Better to reign in Hell than serve in Heaven.”

It would, perhaps, be necessary to quote the entire poem to encompass all of the excellent lines. A few, however, stood out to me:

In the prologue, Milton (echoing Homer and Virgil) invokes the muse, in this case, God himself.

And chiefly thou O spirit, that dost prefer
Before all temples the upright heart and pure,
Instruct me, for thou knowest; thou from the first
Wast present, and with mighty wings outspread
Dove-like satest brooding on the vast abyss
And madest it pregnant: What in me is dark
Illumine, what is low raise and support;
That to the height of this great argument
I may assert eternal providence,
And justify the ways of God to men.

Later in book VI, Satan attempts to recruit the angel Abdiel to his rebellion. Abdiel will have none of it, and answers (in part):

This is servitude,
To serve the unwise, or him who hath rebelled
Against his worthier, as thine now serve thee,
Thyself not free, but to thyself enthralled;

One of the better pictures is Milton’s personification of Sin and Death, who with Satan make an unholy trinity. The picture of the woman Sin, her entrails gnawed by her offspring Death, is perhaps one of the best pictures in literature.After the fall, Sin and Death decide to leave hell and make their home in the more pleasant place that is the earth. The following conversation ensues, Sin speaking first:

‘Second of Satan sprung, all conquering death,
What thinkest thou of our empire now, though earned
With travail difficult, not better far
Than still at hell’s dark threshold to have sat watch,
Unnamed, undreaded, and thyself half starved?’
Whom thus the sin-born monster answered soon.
‘To me, who with eternal famine pine,
Alike is hell, or Paradise, or heaven,
There best, where most with ravin I may meet;
Which here, though plenteous, all too little seems
To stuff this maw, this vast unhide-bound corpse.’
To whom the incestuous mother thus replied.
‘Thou therefore on these herbs, and fruits, and flowers
Feed first, on each beast next, and fish, and foul,
No homely morsels, and whatever thing
The scythe of time mows down, devour unspared,
Till I in man residing thought the race,
His thoughts, his looks, words, actions all infect,
And season him thy last and sweetest prey.’

As a picture of the effects of sin, and the death it brings, was ever a more poignant statement made?

Paradise Lost is rightfully considered one of the greatest works of English literature. I am glad I took the time to read it.

Note: This post sparked an enlightening discussion among my friends when I originally posted it. I welcome any further comments, particularly from those who have read this important work.

Note on illustrations: Although my edition is not illustrated, I did have the chance to see the original illustrations of William Blake for this work. Blake's art is moving when seen up close. It seems to have a life of its own on the page. I also linked some of Blake's illustrations in my review of Inferno from The Divine Comedy. 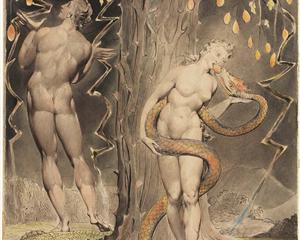 Gustave Dore also made a set of excellent illustrations for Paradise Lost. 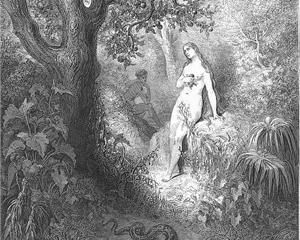 Posted by Diary of an Autodidact at 11:59 PM