Source of book: Borrowed from the Library
Date originally published on Facebook: June 24, 2011

“Honesty coupled to beauty is to have honey a sauce to sugar.” ~Touchstone in Shakespeare’s As You Like It 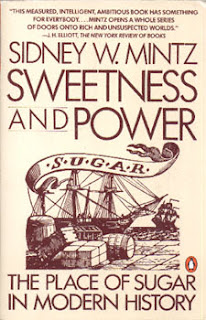 Shakespeare wrote these lines at a time when sugar and honey were still vying for dominance in their uses as sweetener and preservative. Both were primarily used by the upper class due to their expense. How and why did this change?

This is a fascinating book on the sociology history of sugar. In this case, sugar means sucrose, derived primarily from sugar cane. There is only a brief mention of sugar beets and corn syrup – sources which now dominate our diet. This is perhaps natural considering the book was published in 1986 after a decade’s worth of research. At that time, the transition from sugar to corn syrup in soft drinks had just begun, and beet sugar was less discussed than cane sugar.

How exactly did sugar go from an extravagant luxury the source of one-sixth of the calories consumed by the English speaking world? This book attempts to answer the question by looking at three facets of the history of sugar.

The first facet is the production side of the sugar industry. Originally, sugar cane was grown in South Asia, and became popular among the wealthiest of the Islamic world. At the time, the production of usable sugar from the cane was a labor intensive and inefficient process, making sugar costly on the scale of pepper and other spices. Unsurprisingly, this made sugar an easy representation of wealth and power.

Sugar was initially used at this time as a spice and medicine, not as a source of food. Things changed, first gradually, and then rapidly, with the development of the slave colonies in the Caribbean in the 1500s and 1600s. Mintz makes a convincing argument that the sugar plantation was the forerunner of what we now call factory capitalism. (Not to be confused with free enterprise, as so many do today.) Keep in mind that this pre-dated the industrial revolution by a few hundred years. A successful plantation required the infusion of capital to build the infrastructure necessary: irrigation, cane presses, refining equipment. It also required a labor force. In the factory capitalism model, the workers are free, if not exactly powerful. On a plantation, of course, the slaves were held by force. However, with that major exception, many of the mechanics are the same.

The increasing industrialization of the production of sugar lead to drops in price, eventually making it affordable for the masses. Mintz, however, questions whether this could have happened had the demand not kept pace with the supply.

This leads to the second part of the equation. Sugar once represented wealth in the same way that gold and silver did. This lead to some interesting medical remedies from the era, including the use of crushed pearls and gems to “treat” disease. Likewise, sugar was then thought of as a panacea. It could cure everything! A quick view of the advertisements for snake oil products today shows that nothing has changed: find a rare food product from a tropical country, make claims, and get rich.

As sugar became affordable to the upper middle class, it took on a broader role in diet. It was during this period that elaborate desserts became fashionable. The use of sugar in this way trickled down the economic ladder as prices fell.

In Mintz’ view, the change that brought sugar from a luxury to a necessity was its use in tea. The sweetening of a bitter, stimulating beverage came to be part of the very identity of the English – something the poorest citizen could afford as a luxury. The history of sugar’s uses is a fascinating topic which Mintz approaches a bit more academically than I would have preferred.

The third part of the picture is the sociological changes that led to sugar being used as a significant source of calories. I will not attempt to go through the whole history here, but give a little idea.

In general, the factory system removed women from the home and their role as primary preparers of food. Sugar helped this process by making possible condiments such as jam and treacle, which, when added to bread, saved preparation time. A slice of bread by itself was cold comfort, not a meal. The use of sugar could make it pass for a meal. The need here was to save preparation time. Previously, porridge and broths would be a significant part of the diet. These could even be obtained at the same or lower cost, but they required time – a dwindling resource.

It was striking to me that many of the sugar related ills we see in our current society have their roots back 250 years. Sugared beverages contributing too many calories? Check. Lack of time to prepare food leading to increased use of sugar and fats? Check. Women, children, and the poor consuming higher percentages of sugar? Check. Obesity itself only started its climb with the disappearance of hard manual labor and generally insufficient caloric intake. Still, the causes go back a long time in history.

This book does raise an interesting question, however. Can we as a society roll back the advance of obesity without addressing the issue of how to make time to prepare healthy food? It is chiefly the shortage of time, not of money, that leads to poor choices in food. A quick survey of the grocery store is sufficient to see that pre-prepared food is expensive. It also contains plenty of hidden sugar. As in 1750, the reason the sugary, more expensive food is chosen is that it is quick. Who will cook the healthy food?

In my own family, the answer is that we split the job. Our children, regardless of gender, will learn to cook. It is worrisome to note, however, that a significant portion of the population has never cooked something that didn’t come out of a box. I fear we will continue to just keep adding more and more sugar as an easy and relatively cheap source of calories. I’m not sure what the cure is here. A wholesale return to the middle ages with most of the population growing its own food seems extreme. A return to the 1950s, as some propose, would not go back far enough to a time when sugar was a spice rather than a major source of calories.

This book is a bit dry in spots, mostly due to its scholarly intent. Mintz has a story to tell, but he also has to support it with source material. This leads to some repetition and redundancy as he makes sure that each fact he presents is shown by evidence, not just by assertion. As a lawyer, this is a familiar process. Presumably it will be as well to most who have studied the sciences. However, if you stick with it through the academic sections, Mintz tells a compelling story – one that is by turns fascinating, intriguing, and cautionary.
Posted by Diary of an Autodidact at 10:06 PM