Reading With My Kids: The Girl Who Circumnavigated Fairyland in a Ship of Her Own Making by Catherynne M. Valente

Source of Book: I purchased this since our local library didn’t see fit to carry it. 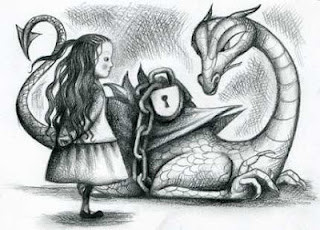 I am participating in an online book club, hosted by my friend Carrie, who has a popular book blog, Reading to Know.

This month’s selection was chosen by Bluerose’s Heart. I cannot find her review on her site, but it is reproduced at Reading to Know.

I hesitate to describe this book as a modern fairy tale, because that comes with certain assumptions that do not hold true for this book. A fairy tale it is, and one published just last year, which would make it “modern” in a sense. And really, it is in the tradition of fairy tales written in the modern era, rather than those passed down in oral tradition from time immemorial. And yet, it has a kinship with the ancients as well.

Like any good fairy story, it transports the reader to an imaginary land, populated with memorable and fantastic creatures. The protagonist, in this case, a twelve-year-old girl named September, must complete a quest, and learn about life and herself in the process. Like any book, the concept itself is only as good as its execution, and I thought the author did a fine job in balancing the elements of the story and the deeper truths she wished to convey.

My kids definitely loved the story, and reminded me to read it whenever we had time - and looked at me wistfully when we couldn’t. The older three in particular were able to appreciate the humor and general absurdity of the book, and understood things better than I expected.

In trying to find some more familiar works to use as comparisons, I decided that this book shares a certain kinship with Lewis Carroll, particularly in the use of the unexpected absurdity, the anthropomorphization of household objects, and the upending of fairy tale cliches. Similarly, I thought of Douglas Adams, who also was able to mix zany humor with a unsettlingly dark outlook. I would also draw the somewhat obvious connection to the Narnia tales (which are name checked in the book) and other “modern” fairy stories: Tolkien and MacDonald, for example, are also obliquely referenced throughout the narrative.

Fairy tales throughout history have not been intended only or even primarily for children. There is a certain edge to the yarns, whether old or new. A certain menace, and a darkness, and a feeling that life is often cruel and bitter. When someone says of another that he or she is living in fairyland, certainly the fairyland of stories is not in mind, as to absorb the lessons of the fairy stories is to have one’s imagination firmly planted in the danger and ugliness that is in life.

This book certainly goes to some dark places. There were a few times I caught my breath, and looked at the kids. The author pushes beyond the zone of comfort on several occasions, and lets injury and near death hit hard. There is no candy coating.

On the other hand, this may well be our modern fantasy of happiness speaking. We live a fairly charmed life, in which the vast majority of children reach adulthood, and we can pretty much count on our next meal and a hot shower the next morning. We think to shield our children from pain, sorrow, ugliness, but it is there, and they will experience it sooner or later. Books like this (and, let’s be honest, Lewis and Tolkien are plenty dark too) contain inconvenient truths about existence that are better faced than denied.

In that sense, the fairy story serves a certain purpose. It invites children to consider “adult” themes. By “adult” I do not mean smut (which is more the province of the immature) but ideas that require more than a simplistic solution. Dilemmas to which there is no perfect answer. Pain and sorrow that do not go away with a kiss. Hard choices. The sweet sorrow of saying goodby.

This is why the very best “children’s” books are engaging for adults as well. There is fun and adventure for the kids. There is also food for thought for those of all ages.

A few of the zingers that I liked:


“Is she [the Marquess] very terrible?”
The Green Wind frowned into his brambly beard. “All little girls are terrible,” he admitted finally, “but the Marquess, at least, has a very fine hat.”

Ah, we fathers of daughters know this only too well.


All children are heartless. They have not yet grown a heart yet, which is why they can climb tall trees and say shocking things and leap so very high that grown-up hearts flutter in terror. Hearts weigh quite a lot. That is why it takes so long to grow one.

September ends up losing her heart (and her shadow and one shoe) in Fairyland - how and why is part of the fun.

I also found the scene where September is washed to be interesting. She has three things specially washed: her courage, her wishes, and her luck. This choice of the authors was interesting food for thought - and imaginative.

Like Bluerose, my kids thought the bicycle migration was hilarious. Particularly the food involved. (Tire jerky and axle grease whiskey?)

The philosophical high point for me was the scene where September meets her death. No, she doesn’t die, but she gets to meet her death, in person.


“Who are you?”
“I am death,” said the creature. “I thought that was obvious.”
“But you’re so small!”
“Only because you are so small. You are young and far away from your Death, September, so I seem as anything would seem if you saw it from a long way off - very small, very harmless. But I am always closer than I appear. As you grow, I shall grow with you, until at the end, I shall loom huge and dark over your bed, and you will shut your eyes so as not to see me.”

And later in the conversation:


“Death, I don’t know what to do.”
“It’s very brave of you to admit that. Most knightly folk I happen by bluster and force me to place chess with them. I don’t even like chess! … And it’s the wrong metaphor entirely. Death is not a checkmate...it is more like a carnival trick. You cannot win, no matter how you move your queen.”

Perhaps this is heavy stuff for kids, but my second born has been asking pointed questions about life and death since she was two. The author does better than most at facing the issue bluntly, starting a conversation rather than ignoring the implications. And too many of us like to think we would win that chess game, whether with cryogenics, health fads, or self delusion of whatever sort.

Finally, I was gratified to read another modern book that grants the possibility of a quest and an adventure, to a girl. Consistently, throughout history, there have been hero tales featuring boys. Occasionally, a girl or a woman will get a shot, but more often than not, they are the inspiration for the quest, content to sit at home and wait. This was nowhere more true than in the Victorian ideal, where the woman who failed to keep her place typically came to no good. Even now, far too many works of fiction (and most of popular culture) teach girls that their worth comes from their ability to get a man. That becomes the whole focus of existence. The girl gets her prince and that is the zenith of her life. From then on, adventure is a thing of the past, if it ever existed.

One hopes, at least, that the days of Elsie Dinsmore are over. C. S. Lewis in many ways threw that door wide open with Lucy as the brave and sensible one of the bunch. As the father of three daughters (and two sons), I wish for them to learn to be strong, to be active rather than passive, to take responsibility for themselves and their choices. As September noted, she hated a certain movie princess who had a high, breathy voice. I concur totally with this sentiment, I confess. Strength and competence are more attractive to me than a fainting “feminine” helplessness.

And really, if we are to be honest, life has the potential to be a quest, an adventure. Or it can be a frustrating and confining humdrum. The difference is in perspective and attitude. As this book reminds us, adventures are uncomfortable. They are downright unpleasant at times. They are exhausting, and sometimes we are desperate for a nap. (Can you tell I have kids?) But one must still get up, lick the wounds, make a ship if necessary, strap on our magic wrench like September, and fulfill our quest.

We revisited this book six years later in audiobook form. Since that time, my older kids have read several of the sequels, and continue to enjoy them. My youngest was too little to stay up to listen when we first read it. She enjoyed it, and does want to hear the rest. I myself enjoyed it the second time. There are so many witty lines, and the sneaky philosophy that characterizes many of the best modern children's books. I still love the way that the female protagonist is an active, adventuring character, not relegated to passivity. However, since we read this, we have enjoyed so very many books with these characteristics. I am happy to say that there has been a lot of change for the good over the past few decades, and interesting, thoughtful, and feminist literature is readily available.

Posted by Diary of an Autodidact at 9:59 PM