Source of book: I own this.
Date first published on Facebook: June 6, 2010

This short novel has been on my list, if for no other reason than that the title character is a lawyer, and the plot involves a trial.

Actually, one could say that before Erle Stanley Gardner (see Mason, Perry), there was Mark Twain. As far as I can tell, this is the earliest novel to feature a scene where the real murderer is forced to confess due to the ingenuity of the counsel for the defense. The use of fingerprints is also key to the plot. At the time Twain wrote the novel, fingerprints were just coming into use as an investigation technique, and his novel helped bring them into the mainstream.

Another striking element of the book is its treatment of race and slavery. Twain wrote a number of books in the 30 years following the Civil War that were set in the pre-war days, and was unafraid to portray slavery and race relations in a realistic light.

Huckleberry Finn is one of the most commonly banned books both now and then. Back then, it was probably banned more for its racy elements than for the racial elements. Now we consider it inappropriate to allow children to read the word, “n-----”. Unless, of course, it is said by a black person on a best selling album. Don’t get me wrong. I have never and will never use a racial epithet. I just do not believe that it is appropriate to bowdlerize writings or other art from the past to reflect modern views.

Pudd’nhead Wilson is no exception to this. It accurately reflects the racial language and prejudices of the time in which it was set. The problem is that some fail to analyze Twain’s writing both in light of the time in which it was set and the time it was written; but also in light of his actual intent and treatment of the topic. Twain was a master of biting satire, which is a reason I love reading his non-fiction. In this particular book, he skewers racial prejudice in a merciless manner. Two children are switched soon after birth. Both look white, but one has a tiny fraction of black heritage, which means that he is a slave. Twain’s story shows that the different upbringing and treatment the boys receive makes them who they are, and that it is the prejudice of others, not reality, which determines black and white, slave and free, educated and ignorant, etc.

This is particularly striking in that the book was written two generations before the civil rights movement. I believe it would be advisable for all teenagers to read those Twain books dealing with race. It would help illuminate how bad the past was, and how far we have come in the 150 years since. Also, along with a great number of other books written in that period, it is a reminder that there have always been those who have worked to eliminate prejudice, and those who have worked to perpetuate it. Twain was not perfect, and he could not totally escape the beliefs of his time. However, he helped to bring prejudice to the consciousness of the nation, and still inspires many of us to look deeper than the surface. 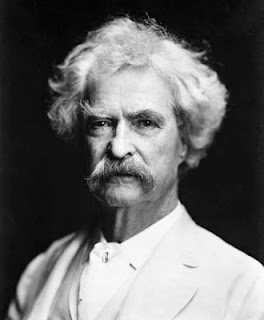 Posted by Diary of an Autodidact at 9:06 PM