The Count of Monte Cristo by Alexandre Dumas

Source of book: I own this
Date originally published on Facebook: June 1, 2010
This is one of my earliest reviews, before I expanded the length and scope of my discussion. 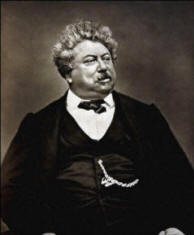 Yet another book that I have, surprisingly, not read before now. I have had limited exposure to French authors as a teen, perhaps because they are not that popular in America. That said, I love Moliere, and enjoy the French wit almost as much as the English.

Since I assume that most of my literary friends have read this at least once, I will be succinct with my comments.

First, I loved the fact that, unlike the modern revenge fantasies, the hero never takes direct action to punish his enemies. Instead, he manipulates circumstances, and lets his enemies’ poor character lead them inexorably toward their own destruction. In all of us, there is a desire for justice, and a certain more or less guilty pleasure in imagining revenge. I have certainly taken pleasure when a nasty criminal meets his or her maker at the hands of the intended victim. This book was obviously written in a time when many still believed that God would ultimately avenge, and that the wicked would eventually reap what they had sown.

Second, I have wondered why Dumas has not been claimed as an author of African descent. His grandfather was an Afro-Caribbean black, with slave roots. His books are some of the great classics of the triumph of the rejected underdog. He himself overcame prejudice, and became one of the best beloved French authors of all time. He may have been a bit racy by the standards of 19th century American moralists, but really wasn’t shocking by our modern 20th and 21st century standards. Maybe an English major can explain this to me. It seems this is a movie waiting to be made.

Third, I find it fascinating the descriptions of 19th Century French morality. Much like today, there was no shame in desiring a woman as a mistress, not a wife (of course, we don’t come out and say it, we just do it). The scene in which Albert de Mocerf rejects the idea of marriage to the Danglars daughter on the grounds that it would be tedious to be married to an aspiring artist is hilarious. On the other hand, all the admirable characters would prefer to be a suicide than a bankrupt. A different time and place in that regard.

In all, a fun read. I think I have come to appreciate French literature more as I have aged. I think some Hugo is in order for next year’s reading.
Posted by Diary of an Autodidact at 11:05 PM