I remember the first time I heard of the California Condor. I would have been age 10 when the last wild bird, AC-9, was captured in 1987. At that time, there were a mere 22 surviving individuals, and it appeared that the Condor would probably become extinct.

For those unfamiliar with these birds, they are a large relative of the vulture. They too are scavangers, eating dead mammals and birds. Contrary to popular belief, there is no evidence that they prey on living animals. This misconception was a contributing factor in their near extinction as ranchers killed them believing them to be predators. DDT was probably the biggest cause of their decline, and once the numbers went below a critical amount, their slow rate of reproduction and vulnerability to lead caused their numbers to dip even further.

The Condor’s range once encompassed most of the American Southwest, but had been reduced to a small area north of Los Angeles. It saddened me at the time that an animal could go extinct during my lifetime. Particularly one that lived relatively nearby.

Fortunately, the breeding program was a success. Beginning in 1991, captive bred condors were released into the wild. The population has continued to grow in captivity, where most breeding still occurs. However, in 2002, the first wild-born chick in over a decade was born. Others have been born since – a good sign for the future.

The year 2002 also saw another milestone. AC-9, who had fathered many chicks while in captivity, was re-released to the wild. He is alive today, and has been spotted by observers in locations from Big Sur to the Grand Canyon. 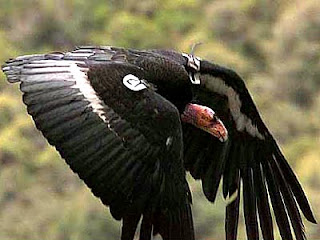 Condor AC-9 takes flight as he is re-released into the wild. Photo from the Los Angeles Times, 2002.

Today, there are more than 400 condors, with about 200 of those living in the wild. California and Arizona are the main habitats, with a small population in Baja California as well.

Yesterday, the kids and I and my relatives Kevin and Judy visited Pinnacles National Monument, one of the California nesting sites. I would also list it as one of the best kept secrets of California – a truly beautiful place, filled with interesting hiking trails. While hiking the Condor Gulch trail in the mid-morning, we happened upon a couple of volunteers with the condor recovery program. They had a radio receive and large antenna, and also a spotting scope. There were two condors in the area, one off flying somewhere out of sight to the southeast. The other was sitting on one of the rocks of the “high peaks” across the gulch. Since he was about a mile away, all we could see with the naked eye was a black dot on top of the rock. However, with the spotting scope, we were able to see him well enough to see the markings on his tracking tag. 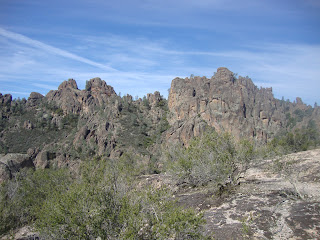 The High Peaks at Pinnacles. The condor is near the left edge of the rocks on the right. Picture by me.

This bird is #411, and is a notorious homebody, preferring to stay at Pinnacles rather than roam around California like the more adventuresome birds. 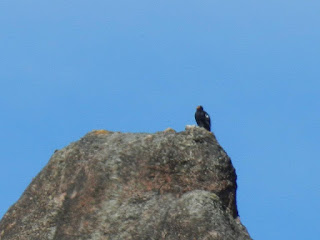 California Condors are still a critically endangered species. Although the recovery program has been a success, there are still ongoing issues. The worst is the tendency of Condors to get lead poisoning. Apparently, they have unusually strong digestive juices which dissolve lead pellets or bullets found in the carcasses they eat. Every year, several birds are sickened, and have to be recaptured and treated, only some successfully. Still, there is good reason to hope that the Condor will continue to survive and increase in numbers.

I, for one, am thrilled that I was able to see one of these magnificent birds in the wild. I am even more glad that my children were able to have this opportunity.

For more information on the condors at Pinnacles: http://www.nps.gov/pinn/naturescience/profiles.htm  I highly recommend visiting Pinnacles. Bring a flashlight so you can go through one of the talus caves. It is best to visit during the cool season, as the rocks seem to magnify the heat, and there is little shade.
Posted by Diary of an Autodidact at 12:39 PM