Their Eyes Were Watching God by Zora Neale Hurston

Source of Book: Borrowed from the library
This is my second annual Black History Month post. Last year, I read and reviewed a poetry collection by James Weldon Johnson, 50 Years and Other Poems. [Note: posted on Facebook, and recently re-published in Res Ipsa Loquitur, the magazine for the Kern County Bar Association.] This year, I chose another selection from the Harlem Renaissance, Their Eyes Were Watching God.
The scope of the Harlem Renaissance is beyond the scope of a simple blog post, and I am hardly the person to write it. I have long admired the poetry that came out of the movement – Johnson, Countee Cullen, and Langston Hughes. I have read a few essays as well, but this is my first real plunge into the fiction of the era.
This book was written in the 1930s, and was largely forgotten. It was “rediscovered” in the 1970s through the efforts of such luminaries as Alice Walker, who worked to bring it to the attention of a wider audience.
I would classify this book as a novella. In the edition I read, it was a little more than 200 pages – double spaced with plenty of white space. While a quick read, it contains a significant degree of dialect, so an acclimatization period is necessary. I found a few expressions to be unusual. Hurston describes the “honeymoon” phase of a relationship as the man talking or speaking in rhymes. I had never heard this used before, and was unable to find a good reference to it online. It does inspire me to keep my words to my wife poetic –at least occasionally.
How should this book be described? Is it an adventure story? A coming-of-age story? A romance? Perhaps it is a bit of each, all mixed together. The central character, a light skinned African American woman, is a fascinating and well developed character. Her life and growth is the story. Her grandmother, her three husbands, a hurricane, life, death, longing. These all impact her, but she remains. She is the story.
Allegedly, Hurston wrote this book in a mere seven weeks during a trip to Haiti. If so, it would be a remarkable accomplishment. As it is, this is a remarkable book regardless of its genesis. 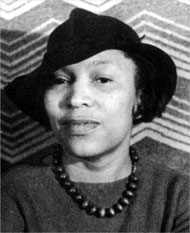